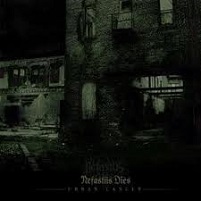 A red flag on this one went up almost immediately after learning members of Ion Dissonance were involved. Not to say ID is a bad band per se, but man, if Urban Cancer were to be loaded with “bree-bree” vocals, this thing probably would have gone flying into the street, with hopes that a garbage truck would run it over. Luckily for Nefastus Dies and the plastic this CD was printed on, ‘tis not the case.

There are few actual songs

on Urban Cancer. Instead, Nefastus Dies cuts loose with the atypical non-standard song structures, meaning everything is thrown into a blender and semblance of cohesion is a total afterthought. This is not a major problem during “Hate Vector” or the blazing “Fragments of Poisoned Components,” but it does pretty much paint the picture of an album with few strands of variety.

Given the parties involved, Nefastus Dies could have done a lot worse and something far more predictable than Urban Cancer. Lineup troubles have plagued the band from the onset and for an album that was supposed to be released all the way back in 2006, Urban Cancer and Nefastus Dies, for that matter are already ahead of the game

. Come next album, we’ll see if they fall back with the pack or continue to tread some daringly unfamiliar ground.