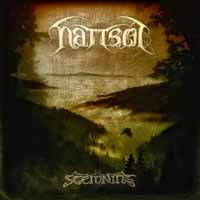 Anyone with the brains to give nods to early-era Borknagar (read: their self-titled debut and majestically majestic The Olden Domain) is worth investigating. For Norway’s Nàttsòl, working in and around the confines of the classic Norwegian black metal sound and its more nature-oriented acts (like Borknangar, and Ulver before they abandoned metal), seem to be the impetus behind the band’s debut effort, Stemning.

While Stemning offers very little terms of what hasn’t be heard in this realm, it does make significant headway with the usage of beautiful acoustic guitar interludes. Not only do these effectively break up the flow of the album, they are in fact, some of the most poignant moments of the album. From there, Nàttsòl employs every trick in the Norwegian BM playbook, from grizzy, harsh Varg Vikernes-like vocals, to foreboding chords that Enslaved made famous around their Frost album.

Album closer “Ved Hav I Avdagsleitet” ends up being the pick of the litter here, with clean male vocals providing the foundation for a steady stream of tremolo picking and classic Norwegian chords (think we can harp on that enough?). In what ends up being a rather uniform-sounding album (minus the acoustic guitar interludes), “Ved Hav I Avdagsleitet” displays the type of versatility Nàttsòl would be wise to delve deeper into next time they get around to recording.

Since there is a severe lack of “new-guard” bands within the Norwegian black metal scene, a band like Nàttsòl is an encouraging sign. They’re quite dependent upon what their forefathers created, and rightfully so, but thanks to improvements in production (imagine how any album from the 90’s would translate now), and all the tools at their disposal, there’s little reason to believe Nàttsòl won’t be hanging around for a long time.