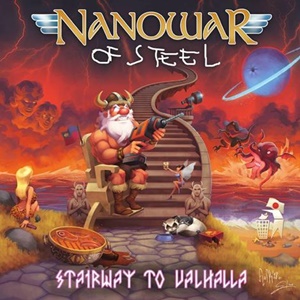 Happy metal from Italy with obvious humor and parody at hand, Nanowar of Steel have been at their craft since 2003 – releasing three studio albums, EP’s, singles, and a live effort before this fourth full-length Stairway to Valhalla. Featuring prominent guests to supplement the activities of the five-piece, the group gravitates towards a varied approach over the course of these 13 songs (plus five intros/interludes) – so expect everything from hard rock and epic metal to even thrash and nu-metal that ensures quite a wide array of elements to the record.

What this means for the listener is a rollercoaster atmosphere that seems to be held together by the unison vocal approach and humorous lyrics or outside the box non-metal influences. You can get Brazilian samba sequences to end “Call of Cthulhu”, then a fierce Judas Priest meets thrash outing for the band’s love of cats during “Heavy Metal Kibbles” – complete with a ‘meow’-oriented chorus and keyboards mimicking other animal sounds amidst the otherwise Halford-like shrieking and double bass kit work. The short “Images and Swords” interlude makes fun of Dream Theater, and then delve into a folk-like acoustic to electric ballad with “…And Then I Noticed She Was a Gargoyle”, sung with the passion of a power metal troop and yet quite comical on the lyrical front. Rhapsody (Of Fire)/ Angra singer Fabio Lione makes an appearance on “Barbie, MILF Princess of the Twilight” which has obvious guitar, keyboard, and orchestration similarities to his work from that epic, symphonic power landscape, while “The Quest for Carrefour” contains the speed/twin guitar accents that put Blind Guardian to headliner status during the early 1990’s.

Nanowar of Steel are adequate musicians and have their stock trademarks down pat – but you have to wonder about the longevity of a record like this, as parody can lose its luster after a few spins if the humor isn’t sharp. Do we really want to know who the boyfriend of David Hasseloff is? Stairway to Valhalla as a result falls into that ‘spin once, cast aside’ category as this scribe would rather listen to the originators over the imitators.