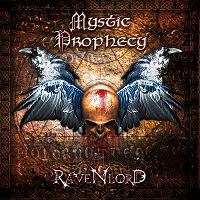 Still known primarily as one of Gus G’s 85 side bands in the mid-00’s, Germany’s Mystic Prophecy are now on their fourth album without the Greekguitar

hero, and seventh overall in the form of Ravenlord. Their hard-nosed brand of power metal isn’t exactly going to blow anyone away, and withRavenlord, the band turns in another workmanlike affair. At least this is power metal with teeth…imagine how bad Mystic Prophecy would be if they were a frilly PM band. Yikes.

At any rate, the band certainly knows how to drop the heavy-handed hammer, with some of these songs maintaining a distinct thud, specifically “Eyes of the Devil” and the raucous “Damned Tonight.” Singer

(and sole remaining original member) R.D. Liapakis prefers to lay off the high-range syrup, and it pays off, as his husky delivery proves to be a strong complement to the otherwise heavier-than-it-should-be stance of “Reckoning Day” and the cover of Ozzy Osbourne’s “Miracle Man.”

The only real standout here is “Hollow,” a song

with a lead riff that takes direct cues from The Police’s “Message In A Bottle” and In Flames’ immaculate “Jotun.” Of course, “Jotun” has the same chord sequence as “Message In A Bottle,” so perhaps both the Swedes and Mystic Prophecy owe a debt of gratitude to Andy Summers for coming up with the riff. (How the heck we went from German power metal to melodic death metal all the way over to a band once fronted by Sting is beyond us.)

Frankly, Mystic Prophecy weren’t all that and a bag of chips when Gus G. was in the ranks, so it’s not like their career has taken a precipitous nose-dive since the axe-man left in 2005. Albums like Ravenlord may pad the band’s ever-growing catalog, but it’s not going to keep them out of the power metal doldrums, where they remain one step away from being completely irrelevant.