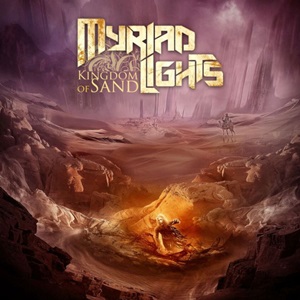 Desiring to combine a love of classic heavy metal with modern and power influences, Italian act Myriad Lights began in 2006 under the capable hands and 17-year old axe skills of guitarist Francesco Lombardo. A few demos and lineup shuffles took place in the early years – finally stabilizing during 2010 and releasing their debut album Mark of Vengeance in 2012 on Underground Symphony Records. Now ready for the follow-up, Kingdom of Sand expands upon the initial offering by introducing alternative nuances to the metal template without sacrificing the quality, a rare see-saw battle most newer bands face in establishing themselves these days.

The classical elements for instance not only come up in Francesco’s obviously schooled chord progressions and shred abilities – the drumming of Filippo Motta during the instrumental section of “Abyssal March” especially has this throwback charge that along with his natural snare hits and double bass propensities elevates the arrangement to higher tier power status. When switching things up to a more epic nature, the keyboard strains and riff choices give off a little bit of that Dio meets Powerwolf feel for “The Deep”, as singer Andrea Di Stefano fluctuates between natural power and semi-operatic melodies. Everything from progressive Lele Mr Triton piano flourishes to nimble Giuseppe Lombardo bass play allows material like the instrumental “039 Lights” and thunderous closer “Ascension” enough dynamic diversity to keep most fans of Firewind, Yngwie Malmsteen, or even Hammerfall very interested as this clocks in at a tidy 41 minutes.

Younger bands could learn a thing or two about setting up a record with variance from Myriad Lights – different tempos song to song, different textures in terms of riffs and sequences, even incorporating exotic, Middle Eastern textures on the title cut not just in the guitar play but again the percussion parts. Kingdom of Sand has all the hallmarks necessary to allow the quintet a benchmark record to build upon – and possibly attain a decent following across multiple metal genres as a result.