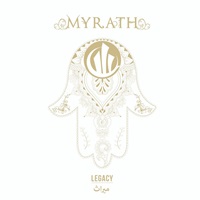 Deciding the time is ripe to name a fourth album after their namesake (as Myrath is Arabic for ‘legacy’), this mostly Tunisian/part French act create an intoxicating brand of progressive metal with Middle Eastern/Oriental folk textures that’s gaining them a steady uptick in respect and eyeballs. Sure we know Orphaned Land probably pioneered that nuance, but it’s certainly refreshing to hear other musicians in their own favored sub-genres take that proverbial ball and run with it – as it beats the hell out of another Dream Theater clone, right?

Augmenting their electric instrumentation with a three-piece violin section, Myrath approach songwriting in a thoughtful manner – maintaining a hook/melody combination first while also offering a broad canvas to weave in those forward thinking ideas and outstanding musicianship sections. At times Anis Jouini explores slap bass elements for the propulsive “Get Your Freedom Back” as the keyboards of Elyes Bouchoucha move between semi-symphonic meets cyber-Amaranthe layers. The band’s background in death metal plus Symphony X (early incarnations content with covers providing a learning curve) pays dividends in a heavier approach to certain riffs, while also allowing for clean contrasts – check out “The Needle” and “The Unburnt” for the seamless construction to give these musicians a difference maker that marks leadership quality on record.

Zaher Zorgati as a singer has soaring pipes and handles the exotic/Oriental aspects with equal originality, often incorporating his phrasing and enunciation in a similar cultural flavor – especially in a slower, more emotionally impactful ballad like “I Want to Die”. The cascading keyboards create an aural waterfall for guitarist Malek Ben Arbia to lay down some cool dark power/progressive chord action on personal favorite “Duat” – and the quintet smartly keep their songwriting on average around a very reasonable 4-5 minute timeframes, eliminating possible burn out from long-winded instrumental sections.

Symphony X and Kamelot followers need Legacy in their lives – heck, all melodic progressive metal fans who want a strong exotic flavor to their vocals and music need to succumb to the charm of Myrath. Probably one of the records that will be talked about in ProgPower circles for years beyond. 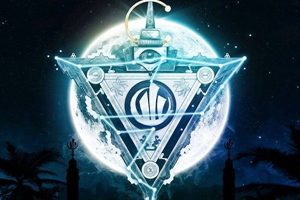