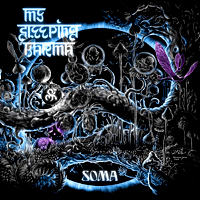 The old adage that “There is no such thing as background music” should be tossed aside when discussing My Sleeping Karma’s fourth album, Soma. About as relaxed as a spa treatment and energetic as a stoner with a bag of Doritos by his side, Soma and My Sleeping Karma take up residence in the instrumental post-metal world occupied primarily by the likes of Pelican, Long Distance Calling, and Red Sparowes. The big difference between those bands and MSK is that there are at least some rationalized attempts at being heavy and getting out of those meandering, foggy jams. My Sleeping Karma seem to be perfectly content with hanging around, and hanging around listlessly, for that matter.

Named after the drink of choice for Hindu gods, Soma’s song titles are named after an ingredient for the drink, which in a roundabout way, is pretty cool. It sure beats having song titles about the ingredients for soda, for there’s simply no way to make high-fructose corn syrup sound appealing, other than to those who live and die (in the literal sense) by 32 oz. drinks. Perhaps the band’s intent was to give the album a liquid feel to it, as in the album “flows” like a drink would. It certainly does that, thanks in large part to serene interludes that eliminate dead air, thus giving Soma a gentle and calming quality.

The songs on the other hand, are average takes on post-metal at best. Even calling this post-metal is a reach, though, for there the moments and gnashing guitars and expansive chord movements aren’t exactly in abundance, save for “Ephedra.” The overtly simple nature of opener “Pachyclada” is the tone setter, as wistful guitar leads glide in unison with a reserved back-beat, showing just how little urgency the album has. Trippy, psychedelic meanderings comprise the bulk of “Somalatha,” while the build-ups and quest for dynamics on “Psilocybe” and “Saumya” ultimately fall short.

Because there are so many able-bodied bands of the post-metal or atmospheric variety, My Sleeping Karma’s reserved and lackadaisical numbers fall to resonate on Soma. Hard to see this one getting a rise out of anyone…unless your face is caked in mud and you’re at some sort of spa resort 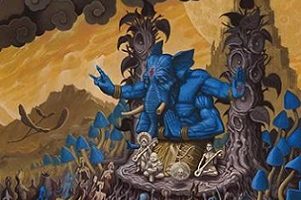