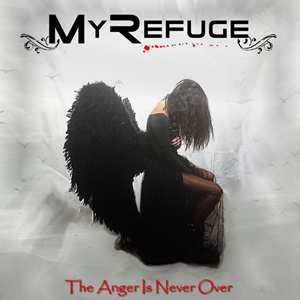 An Italian power metal group originating in 2010 as a solo project from guitarist Mauro Paietta, My Refuge released two EP’s before signing with Bakerteam Records for 2015’s A Matter of Supremacy debut album. Six years later, they’ve moved to Pride & Joy Music and the follow-up The Anger is Never Over hits the streets – involving musicians now across four continents and fourteen countries. What’s most notable regarding the eleven main songs (beyond “The Child and the Moon” 2:24 instrumental) is that each track features a different vocalist – straddling the ‘project/band’ status at this given time for these musicians, although the foundation trio of Mauro, bassist Javier Perez, and drummer Mark Vetter do grace most of these tracks.

Vocalists from Turkey, Argentina, Venezuela, Italy, Canada, Greece, Romania, Brazil and Columbia appear – a wealth of talent all capable of hitting those multi-octave power melodies necessary to compliment the main riffs, hooks, and choruses throughout My Refuge’s style. Certain singers like Davide Vella on “Mistress of the Dark” convey aspects of Graham Bonnet while Berzan Önen on opener “Immortal Fire” has a great mix of Ronnie James Dio and Russell Allen within his potent pipes. It’s clear Mauro understands the genre and possesses the right songwriting and playing abilities to convey his ideas in a concise, catchy manner – giving drummer Mark Vetter ample opportunity to flex his percussion / time signature shifts on highlight “War in Heaven” while adding a bit of a staccato/groove aspect to “After Ten Years” that has a modern slant on some quick hitting, circular axe harmonies. The triggered/ typewriter tick-tock aspect in the kick drum department can get a bit overwhelming in certain songs – but there are additional keyboard movements during “The River and the Rain” that dial in some of the Italian power nature that put Labyrinth on the map during the late 90’s. The music has an overall uplifting/energetic atmosphere – the band familiar with the work of Stratovarius during their Episode/Visions prime as well as loving all eras of Helloween, Judas Priest, and Gamma Ray, even executing an emotionally-charged ballad for “Memories” where singer Andra Ariadna Chitu conveys tender restraint during the verses and upper register passion through specific passages.

The only area of possible confusion may lie in the cover art – the portrait and grey/black color scheme better suited for a gothic or symphonic act, not something normally associated with a power metal outfit. The contents deserve attention though, as many who prefer this genre love the energy and singalong nature the melodies, hooks, and choruses provide throughout. My Refuge provides mandatory listening for those who love 90’s-2000’s-oriented European power metal.