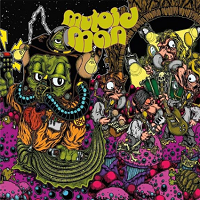 Cave-In’s gradual re-gravitation toward metal should be met with some trepidation. After all, weren’t these lackeys in hot pursuit of major label, non-metal gold after Satellites blew up over a decade ago? And weren’t they a mere shell of their former (and most well-loved) selves once critics got hip to them? A tad weird; makes one sit on the fence for something like Mutoid Man. which is the two-man project of Cave-In honcho Stephen Brodsky and Converge whirling dervish Ben Koller on drums, with Helium Head emerging as their frenzied debut.

Based on Koller’s non-stop, action-packed drumming (he’s pretty off-the-rails in Converge, too), the music of Mutoid Man is practically formless, so as the monster fills fly on something like “Sacriledge,” the pair end up avoiding the pitfalls of classification in one fell swoop. The tech’d and prog-action of “Gnarcissist” suggests thrash on the palette, while the buoyant “Lost in the Hive” could be seen as a reach into those cherished late 90’s days, when Boston (and surrounding areas) was the go-to place for advanced, angular hardcore/metal. It’s certainly applicable here; all of these songs (seven in all) have odd shapes, jumps, and spastic movements that can be pretty enjoyable, like “Scrape the Walls.”

Brodsky is getting by with his float-y, post-rock arena vocals, so cancel out any pointless growl fodder, which is one of the better elements of the running order. Therefore, see this as a fun pairing, something that doesn’t threaten the two’s primary breadwinners, while showing off how good of a drummer Koller is, and that Brodsky knows a good riff when he decides to play one. How ever often that happens outside of Mutoid Man is negotiable… 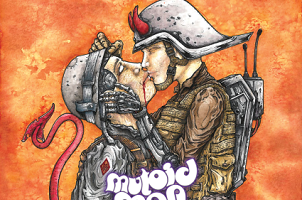