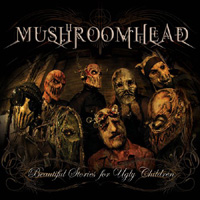 The debate whether Mushroomhead are more valid and better than Slipknot is now a long-gone proposition (for the record, they are), and it has allowed the Cleveland-based troupe to gradually carve out their own niche, something that’s readily apparent on Beautiful Stories For Ugly Children. As much as it’s easy to paint these guys are aggro-clowns (they’re not), there’s definitely a stringent depth to a lot of these songs, which very well could be the reason they’ve long outlived their fad phase.

Lead single “Come On” is a quick, effective number, with a chorus that just begs to be played in a hockey barn for a wrestling event. The chunky “Inspiration” and “Burn the Bridge” emerge as two of the more straight metal-based numbers (especially “Inspiration”) and this perhaps the most head-scratching thing about Mushroomhead. When they stick with guitar-driven songs, they’re awfully effectively (“Harvest the Garden” and “Darker Days” rank up there as well), but too often, they wander off into hazy, keyboard-laden territory.

“I’ll Be Here” and “Holes in the Void” are two detour songs that are privy to the above notion, although “I’ll Be Here” is quite infectious. Credit singer Jeffrey Nothing for his work here, as he is a clear improvement over original singer J-Mann. Yet the noticeable lack of harder songs toward the back end ultimately sideswipes the album, as “The Harm You Do,” and “The Feel” sorta just sputter out.

Again, it doesn’t take a rocket scientist to figure out Mushroomhead is superior to the masked maroons from Iowa, but they’re this close to being the formidable, imposing band they really should be. That being said, Beautiful Stories For Ugly Children should enable Pig Benis and friends to keep hanging around for a long time, which considering how short everyone thought their shelf-life was going to be in the early 00’s, is a feat onto itself.