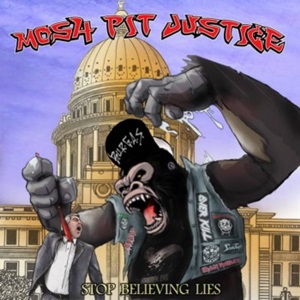 Probably doesn’t take a rocket science degree to know what style to expect from these Bulgarian musicians… warriors for proper pit etiquette, Mosh-Pit Justice have been very active since their 2012 inception. It’s quite refreshing to see the trio release an EP and two other albums in a scant three years, setting up Stop Believing Lies as their third full-on thrash salvo in the hopes of attaining a wider reach in the ever-present resurgence of the movement. Born in the mind of bassist/primary songwriter Mariyan Georgiev, these eight songs contain an unyielding, semi-progressive and power charge that along with an upper tier, melodic vocal delivery separate these gentlemen from the recycling Exo-Testa-Slayer crowd.

The first set of guitar riffs and slamming drum tempo change for “Burn to Live” signal Mosh-Pit Justice aren’t mincing words or luring quietly in the shadows – they mean business, double bass and fierce gang vocals punctuating the Forbidden-esque attack. So much so that George ‘Peich’ as the singer probably honed his chops on Russ Anderson’s work within Forbidden Evil and Twisted into Form – he has the soaring falsetto, rapid fire variance and barking mid-range down pat for winning numbers such as “Rest in Flames” and their name sake “Mosh-Pit Justice”. Acoustic guitars that start “Left for Dead” showcase axe-man Staffa has an equal love for Sanctuary and Metal Church in terms of catchy, repetitive runs that can be tranquilly alluring – before the electric layers of harmonies and marching rhythms carry the crux of another highlight track.

There are a couple of times where George’s inflection struggles come out, as English is not his first language – but the conviction and sheer confidence of his delivery tips the scales in the listener’s favor. It’s as if the three-piece lock onto the second wave of Bay Area thrash, add in a little of that Washington power movement, and remind people of a sophisticated brand of advanced musicianship circa 1988-1990. The political satire cover may portray America in an accurate if unflattering manner – plus the production is robust and lively. In the end Stop Believing Lies keeps hope alive for those who miss Forbidden and others of that power/semi-progressive thrash ilk. 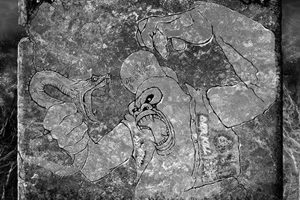