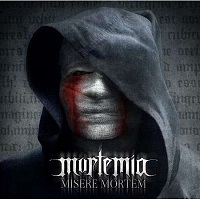 Just about a year ago we reviewed Sirenia’s The 13th Floor release. Its bubblegum Goth metal quickly won this scribe over, then vanquished, like any good quick-and-easy form of music should. We only mention this because the man behind The 13th Floor is the same dude behind Mortemia, Morten Veland, who must like seeing some variation of his first name in his own band’s name. It would be like yours truly starting a band called “Davidian.” Great Machine Head

song, by the way.

At any rate, Misere Mortem is the solo debut from Veland, a Goth metal mainstay if there ever was one, having helmed Tristania when they were actually good and leading Sirenia to relatively respectable heights. As such, Misere Mortem is merely a composite of the two bands, with Veland’s imitable song

Make no mistake, the bulk of these nine songs

are good, if not better than average Goth metal fare. However, Veland repeats himself more than a few times, thus prompting songs (especially choruses) like “The Eye of the Storm” and “The Wheel of Fire” to bear too much similarity to each other. Blame it on Veland’s choral layering approach, where he takes a handful of male vocals and blends them together…it all sounds the same in the end, my friend.

Nevertheless, Veland has proven to be a dependable fellow when it comes to Goth metal, so we’ll rank Mortemia as a winner. Apparently the man has plenty of material to go around considering he writes the bulk of the songs for Sirenia. Goth metal…the world keeps spinning and spinning and Veland keeps popping out the material. Good for him.