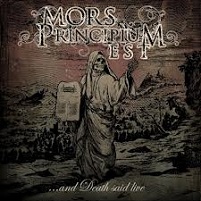 The allure, or at least media-friendly story with Finland’s Mors Principium Est was that former guitarist and primary songwriter Jori Haukiohated metal. As in, hated metal like your grandmother hates it. The guitarist made no bones about his affinity for other forms of music, including dance and pop, two elements that gradually crept their way into 2007’s Liberation = Termination. Yet, this was what made MPE a melodic death metal draw – because of Haukio’s distaste for the very music he was creating, came advancements from someone who was essentially an outsider. Alas, the band took five years to recover from Haukio’s departure, eventually regrouping with a new guitar tandem for the release of their fourth album, …and Death Said Live.

Obviously, the focus here is on new guitarists Andy Gillion and Andhe Chandler, both of whom were charged with assembling material for the new album. It appears as if the pair have done their share of MPE homework, for …and Death Said Live is a simple retracing of the band’s previous efforts. There are zero attempts at getting out of the band’s melodic death metal comfort zone, with riffs, melodies, and song constructs ringing far too familiar to be considered an improvement over the band’s first three albums. In fact, this is probably MPE’s most underwhelming effort to date.

While the band did little to challenge themselves, there are some redeemable moments, including the dashing “Departure” and punchy “Birth of the Starchild,” a song that could easily land on 2005’s The Unborn thanks to a face-melting mid-section, complete with electronics. Without the dynamics that Haukio brought to the table, though, the album ends up repeating itself, running out of steam once anti-climatic closer “Dead Winds of Hope” finds its footing. There’s just a preponderance of over-used melodic death metal riffs, that’s all.

Since …and Death Said Live is MPE’s comeback album, one could let this one slide…and Blistering probably will. Where once the band was at the forefront of the 00’s melodic death metal movement, they’re now forced to play catch-up, as the likes of Omnium Gatherum and Kalmah continue to challenge and enthrall. Needless to say, MPE isn’t fooling, or even intriguing anyone with …and Death Said Live.