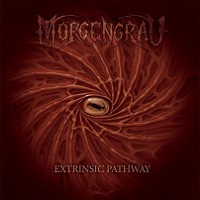 Austin, Texas-based death metal purists Morgengrau have the right idea by not trying to push the fact that two women comprise half of their lineup. It’s usually a cheap marketing tactic by label and PR folk to get more people in the door, yet here we are, making it the first item in this review. Perhaps we’re the shallow people. Nevertheless, the band’s Extrinsic Pathway debut is a tough, gritty romp through the annals of mid-paced death metal, with a quality cover of Sepultura’s “Inner Self” to boot.

The band’s approach to death metal is based largely in the dungeons of classic death metal (go figure), so let’s take out any technicality right away and focus on the long-form grind that takes place over the album’s eight tracks. Speed isn’t much of a consideration, so the crunchy and churning “The White Death” and “Grave of Lies” certainly suffice. Singer Erika Swinnich Tandy has a blood-curdling rasp, though, and she’s put to good use without becoming an annoyance, like most third-rate death metal singers.

Extrinsic Pathway stays out of full-on Morrisound and Sunlight Studios worship and in turn, helps Morgengrau establish some semblance of identity. And if their cover of “Inner Self” is any indication of where their hearts lie, then Morgengrau might be an ample choice over the throng that doesn’t think twice about stealing every riff Entombed and Dismember coined.