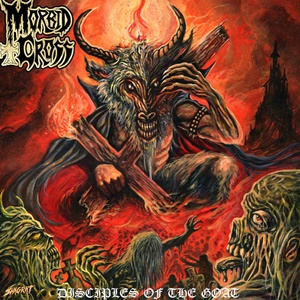 Bringing the metal back from Vineland, New Jersey, Morbid Cross have been together since 2009 – releasing an EP in 2015 entitled Practice What You Preach (not a cover of the Testament classic) before this full-length Disciples of the Goat. Taking a gander at their social media pages, they have an interesting influence tree to pull from, which aids the cross-pollination approach to thrash the quartet brings to the table through these eleven songs. Younger bands should take advantage of the diversity past and present that metal delivers – and it’s clear from top to bottom that these musicians sprinkle everything from modern to NWOBHM, death and progressive aspects to their foundation of speed and intensity.

Lethal doses of savage guitars against a blitzkrieg of bass/drum pummeling keeps “Reflections of Reality” and the title track abuzz for early highlights, the acidic, fervent screams and impassioned delivery from singer Zach Marcus sitting more in line with Paul Baloff meets Phil Anselmo in a hardcore match to the death. A doomy, plodding side of Morbid Cross appears on “From Beneath”, the punishing snare/cymbal crashes signaling impending gloom and a nice dynamic twist that could be a future fan favorite. Going for the throat at raw, blackened-ish paces within “Forever Cursed” showcases a penchant for early Sodom and Mayhem, that relentless/aggressive attitude and take no prisoners execution that hopefully does not dissipate as the band gets older. Expect leads that feed off energy rather than seeking perfection, and a drum solo salvo that opens the almost eleven-minute epic closer “Choked With Insanity” that Sacrifice or old Death Angel maniacs live for in terms of ripping/melodic riffs, venomous vocals and a sick pit-enhanced transition that thrash mavens maul, stomp, and windmill with to the grave.

Replacing a skull cliché with a cross-carrying goat on the cover is another difference maker – beyond the strong production values that allow the listener to pick out all the instrumentation clearly. For this scribe’s first introduction to Morbid Cross, the band’s abilities and songwriting strengths prove they will elevate themselves from the underground quickly if they can deliver the goods live as they have here. Disciples of the Goat is for those into the primal thrash movement – and its enduring satisfaction time after time.