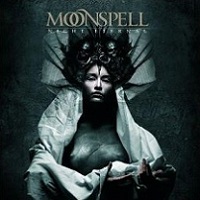 Since their rediscovery of the Wolfheart-era sound, Portugal’s Moonspell have enjoyed a career revitalization that is both surprising and deserving. Fact of the matter is, Fernando Ribeiro and co. have taken their fair share of chances, taken some lumps (the ill-conceived Sin Pecado album comes to mind) and still remained vital. 2006’s Memorial was largely a miss, but if Moonspell is good at one thing, it’s bouncing back.

The bulk of Night Eternal is convincing, well-worn, and atmosphere. The title track, “Moon In Mercury” and album highlight “Spring of Rage” demonstrate Moonspell’s imitable style, especially “Spring of Rage” which reverts back to the vaunted melodic Goth template used so well on the classic Irreligious platter.

No major complaints can be doled out here; Moonspell have dipped back into their roots for another round of charming, exotic Goth metal that while not as immediate or as gripping as Irreligious, is proof that Moonspell, backs to the wall and all, thrive under pressure.