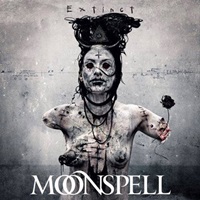 Quickly transforming from their extreme black Wolfheart debut album roots into a gothic/atmospheric metal institution thanks to the success of the follow up Irreligious, Moonspell in their 23 year existence adhere to instinctual guidelines for their recordings. Sometimes meeting disapproval in particular shifts for the industrial/cyber touches on The Butterfly Effect, their last album Alpha Noir reminded the faithful that the quintet can still be quite heavy in their dark, atmospheric songwriting. Studio album ten Extinct appears to be a logical follow up, accentuating their glorious past while serving up a set of songs that embody the wide appeal of the genre.

You have to love the mixture of almost folk-like rhythms against the triplet, heads down electricity that makes the title cut in slot two an early highlight, Fernando Riberio’s dual harsh word spew and natural Pete Steele/Type O Negative haunting clear melodies in sync with the contrasts. Guitarists Ricardo Amorim and Pedro Paixão elevate many of these tracks to breathtaking heights, their work on the quieter “The Future Is Dark” or catchier “Breathe (Until We Are No More)” tasteful and in accordance with the deep feelings and textures of each individual song- sparse one minute, frantic the next. Drummer Miguel Gaspar even adds in a little 50’s rock ‘n roll groove flair that makes the Paradise Lost circa Draconian Times era “Medusalem” another Moonspell toe-tapper, the keyboards and symphonic touches delivering more of an exotic dynamic.

Even when the band choose to offer up slower, quieter material, the band seem to inject this intuitive sense of beauty and softness while still being musically energetic and entertaining – as “Domina” or the doted note favored “Funeral Bloom” illustrate different approaches that work in Moonspell’s array of tricks. Sometimes you need records that flow along in a logical sequence while not requiring deep, intense listening sessions to embed themselves in your psyche. Beyond their thought provoking cover art which seems to tie in a number of lyrical concepts, Extinct proves Moonspell’s top tier status in the atmospheric/gothic metal ranks is well warranted.