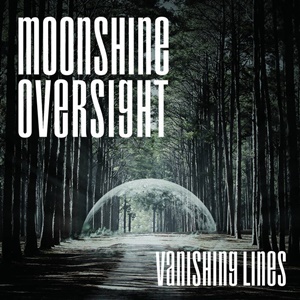 As reach expands globally, submissions increase to garner releases like this French quartet Moonshine Oversight. Forming in 2014, this progressive-oriented act dips their toes in a variety of platforms, embracing everything from metal to post-rock, even taking on nuances of doom, alternative and folk influences for their debut album Vanishing Lines. After numerous playbacks you come to realize the underlying essence of proper crushing hooks, harmony, and interplay possibilities makes the flow of this record very seamless, ensuring heightened engagement on all fronts.

The subtleties of rhythm section work on “Beyond the Stars” set the stage for dynamic build ups in the guitar and vocal departments – comfortably lurking in the background with shifting impetus as the recurring layers pin ears a la Tool meets Gojira in a Porcupine Tree back alley. The post-rock effect appears in more subdued ways – acoustic action against electric, distant/plaintive vocal passages, brilliant against a cultural/harmonic instrumental section for “Mayflies” that is sure to appease multiple progressive factions. At other times, the melody lines and main riffs possess a commercial sheen that speaks volumes to the genre-hopping comfort Moonshine Oversight employ – almost to an alternative/modern rock playlist caliber for the mid-tempo swinging “Moonrakers” and circular, semi-mathematical “Sparkling Cut”.

The obvious standout aspect to Moonshine Oversight’s appeal, beyond stellar composition and musical knowledge, is the potent, bluesy register of guitarist Julien Pivi. Right out of the gate on “Vultures”, he has this eerie doom reflectiveness that combines Layne Staley, a cleaner Opeth, and a touch of Maynard/Tool – and it continues to shine on a quieter arrangement for “Feel”, using a measured lower delivery that emotively touches as the harmony angle creeps in and out. Intertwining shorter pieces next to longer six to nine-minute arrangements proves the band’s proclivity towards diversity – commendable and something to keep eyes and ears on down the line for future recordings. Progressive music can be catchy and groovy, heavy and propulsive, with shades of grey in between that open numerous directions and possibilities up for this album. Vanishing Lines as a result could be that hidden gem for various music aficionados.