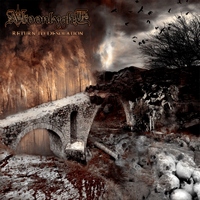 Veering between a break-up and long waits between albums, Moonlyght has never really generated the fanbase they deserved. The Quebec-based band now operates (since 2011) as a studio band only, and Return to Desolation is the first album since 2008’s Shining. Filling a rather individualized niche, it’s good to see Moonlyght back – in top form no less.

Moonlyght’s greatest strength is the massive amount of diversity present as you move from track to track (not to mention inside each track). Musically, it’s all over the map – ranging from black metal to folk to death to progressive and incorporates symphonic elements in as well. Vocally, it’s just as eclectic with a wide variety of cleans (both male and female), whispers, growls, screams, and just about everything in between. It’s a lot to take in, but Moonlyght are exquisite songwriters and there is never a moment on the album when you hear a jarring transition. Everything is smooth and executed with much attention to detail. Of course it helps when all but one of the songs exceed the 6-minute mark.

There are plenty of highlights to take in as you move your way through the 71-minute journey that is Return to Desolation. There’s the symphonic blackness of “(To a) Ghastly Future,” which shifts into some somber strings. The triumphant clean vocals of the title track that cross paths with some hefty black/death riffings also come across as a highlight. But the thrashy and blast-beat ridden power of the closing “Blowing Winds” may take first place, with a melodic middle featuring some awe-inspiring melodies and fiery soloing to finish things off.

While there are highlights, Return to Desolation is best taken in during one session start to finish. While the length may not make it easy, the benefits will speak for themselves as you discover how the band weaved their creativity through the album. Some things are meant to be taken in and absorbed, and Return to Desolation definitely fits that criteria.