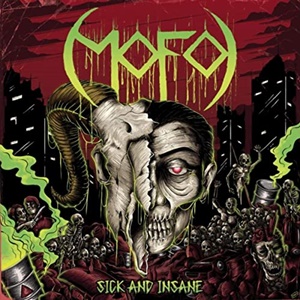 Forming in 2010 by a new generation of metalheads, Brazil’s Mofo have been slowly attaining the right credentials through live work and recording sessions, including their 2017 Empire of Self-Regard EP which leads to their first full-length release on the table Sick and Insane. It’s evident right away after a few spins that you have a quintet focused on developing a thrash sound that is entertaining, slightly sophisticated/progressive in spots, but also sticks to the mechanics of many scenes from North America and Europe familiar to those who love the early movement from the 80’s/90’s.

Tight rhythms and speedy transitions from drummer João Paulo ‘Mancha’ make “Brothers of Death” an early highlight, while the thunderous follow-up “Time for War” contains some semi-blasting measures and lightning sharp, technical lead breaks between Rodrigo ‘Shakal’ Loreto and Arthur Colonna as the arrangement moves around the Warbringer/Slayer meets Sodom landscape – the narrative / military leader components adding another sinister aspect to the track. The ‘outside’ funky aspect of bassist Pedro Dinis comes into play for the opening measure of the title track, an otherwise blistering thrash song where vocalist Emiliano Gomes goes from crazed screams to savage lower register grit, crossing over work from Tom Araya, Phil Rind, and possibly Gerre of Tankard. When the band wants to get a little groovier with the guitar work and rhythm section transitions, you get “Frank”, which can recall more of the East Coast crossover thrash/hardcore sound with a bit of technical/extreme angles.

Overall Mofo has all the requisite tools, abilities, and songwriting prowess to maintain a presence beyond Brazil and gain attention from international audiences. Some may have a bit of trouble handling the wild antics and semi-struggle with proper English enunciation for Emiliano, but it’s not to the point of alienating most thrash followers. The tribal-ish band logo and layers of imagery to pour through on the cover help the cause – Sick and Insane is for those who like a bit of semi-progressive thrash that is aggressive, sophisticated, and melodic from track to track.