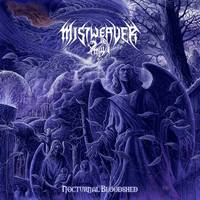 Spain’s Mistweaver, like many other of-intelligence bands, recognize the value of mid-to-late 90s melodic death metal, a time when the style was at its arguable peak, well before more commercialized sounds (see: clean vocals) infiltrated the scene. We shan’t reel off the typical list of Gothenburg bands, but Mistweaver incorporates the unsung of evil-melody burn of Storm of the Lights Bane-era Dissection, along with a true unsung band of that era: Naglfar. So in essence, Mistweaver are yet another band who are the sum of their influences (aren’t they all?), turning in a commendable throwback display on Nocturnal Bloodshed, their fifth album.

Mixed and mastered by Mr. Dan Swano himself, Nocturnal Bloodshed possesses plenty of cackle and subterranean grit, eschewing the polish-heavy approach that normally blemishes processed melodic death metal. To that point, the band incorporates the spare female vocal intrusion of the operatic variety on “Pandemonium,” while also layering in some unobtrusive keyboards, which play more of a bit role than anything. Therefore, the onus across the album’s nine song is the band’s riffs tandems, many of which veer from purely melodic (“The Biggest Threat”) to Slayer-esque (“God is Dead,” which may or may not take cues from “War Ensemble”) to triumphant Goth (“End of Times,” which not surprisingly, features dominant female vocals).

The issue with bands like Mistweaver is that there’s always a stopping point with progression, even in lieu of the extraneous elements that come and go. Yet, there’s a certain degree of nostalgia attached to albums with the approach to that of Nocturnal Bloodshed, where saccharine melodies are left at the doorstep and true essence of melodic death metal is explored to the nth degree. If the album accomplishes anything, it’s exactly that.