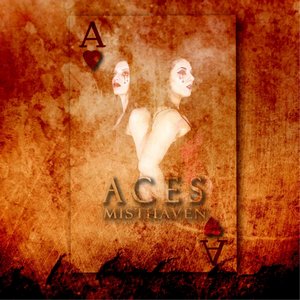 Having initially checked out 2 Misthaven songs through a Bandcamp column back in 2016, it’s nice to see that the act has finally delivered a full-length album of songs. But where their previous single felt more symphonic metal in its execution, Aces dials down the heaviness in their approach for the majority of tracks, but that’s not necessarily a bad thing.

The decrease in heaviness, with the band more often approaching a hard rock line (a la Evanescence or Halestorm) seems to indicate a natural progression of their sound. Having metallic parts for the sake of being ‘metal’ never benefits anyone, and Aces has a very comfortable fit to it. It’s quite melodic in tone, with some ballad-y material sitting alongside more rocking numbers. But even at maximum volume, Misthaven has a laid-back quality to it, something akin towards what Leah accomplishes but done in a stylistically different direction. “The Bless,” “The Chance,” and “Melted Past” sit as some of the heavier offerings, and the catchiness of the choruses, with the presence of some interesting riffs keep the band from falling into too many pitfalls of similar groups. Couple this with some of the excellent melodic nature of their softer side, a la “Sunwarmth” and “On Spring and Hopes,” which feature some fantastic vocal work, and you have a formula for success. The only thing that really holds back Aces is the production itself, which may be due to financial reasons, but it feels a bit flat where it could be more boisterous – the last thing required to take the band to the next level.

Misthaven makes good on their previous offerings and Aces is a solid piece of music for those potentially seeking something a bit more ‘relaxing’ than the usual. The songs are genuine in execution and feeling, and they just need that extra push to get them into a larger spotlight.