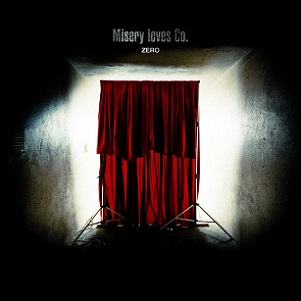 Once on the cutting-edge of new metal sounds (notice the use of “new” versus “nu”), Sweden’s Misery Loves Co. represented a new way to approach metal, particularly in the industrial vein. Their 1994 self-titled debut and 1997 Not Like Them follow-up were hailed for the slicing blend of Ministry-like guitars with a coherent, almost hummable sound not unlike Nine Inch Nails or Stabbing Westward. The Swedes released one more album, 2000’s Your Vision Was Never Mine To Share, before hanging it up. Nineteen years elapsed since Misery Loves Co. released a new album, with Zero charging back like it’s the ’90s all over again.

Misery Loves Co. was never necessarily about the harshness, but instead more about how to foster heavy, driving guitars with the raw-throated Patrik Wirén. (Fun fact: Wirén used to front Swedish thrashers Midas Touch, who were signed to Noise Records for a spell.) On Zero, Misery Loves Co. doesn’t make much of a distinction between their ’90s output and the sounds of today. In fact, it’s steadfastly rooted in the sounds of two decades ago, which is perhaps where the charm lies. Their forgettable cover of Garbage’s “Only Happy When It Rains,” Zero cranks out pulsating, inherently radio-friendly cuts such as opener “Suburban Home,” the Killing Joke-inspired “Dead Streets” and the pop-friendly “Way Back Home.”

In lockstep with the idealized version of industrial metal, Misery Loves Co. represents not only what could have been, but a broader realization that this particular style could have had a longer shelf life outside of Ministry’s erratic output and Godflesh’s cult curiosity. Misery Loves Co. split the difference. Circa late 2019, they’re acting like the 2000s never happened, and, not surprisingly, it makes Zero all the better for it.