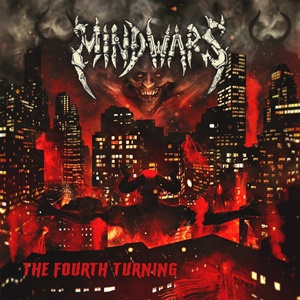 Featuring guitarist Mike Alvord who many may remember during the 1980’s for his speed metal exploits in Holy Terror, Mindwars are an international outfit with members in Los Angeles, CA and Italy churning out a familiar brand of thrash metal for their fourth album, aptly titled The Fourth Turning. Expanding to a quartet as former bassist Danny Pizzi slides onto second guitar and they add new bassist Rick Zaccaro, you get ten original tracks plus a Slayer cover that epitomize their blend of muscular speed/thrash with punk and melodic hard rock influences – chock full of stirring riffs, pounding tempos, and sadistic main vocals with a penchant for gang-like choruses to bring it all home.

Mike’s semi-exotic flavorings that feature gallops and spirited power chord progressions proliferate specific songs – his vocal melodies featuring that punkish-James Hetfield/Alice Cooper-like sneer to match many of the proceedings, most evident on “MindWars” or “Holy Terror”. At other points, calmer or more introspective songwriting takes shape – Danny and Mike layering clean and heavier sections to Megadeth-like perfection on “The System” which features straightforward rhythm section work that grooves in spots, while the lead break work contains a great mix of bluesy propulsion and exemplary speed licks. Mindwars isn’t always about speed and aggression – they know how to also deliver a stealth-like doom-oriented intro if need be, as “Marching Off to War” illustrates with drummer Roby Vitari shuffling in some wonderful double kick mechanics against the main crunchy riffs and rumbling bass. Will Mike’s voice ever be considered in the elite class of thrash, a la Hetfield, Belladonna, or Araya? Probably not – his melodies and delivery are serviceable for the songs on hand, more of a bluesy warble that gets the job done but aren’t exactly powerful. It is nice to hear their interpretation of “Criminally Insane” to end the record – the infamous cymbal to snare/kick intro and churning riffs a staple of that Slayer classic.

Happy to see a veteran of the scene still inspired to release new music every couple of years as Mindwars does. Those who love the early thrash movement with some semi-intricate interplay will dig into this the most. 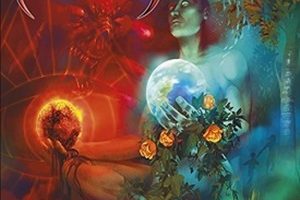