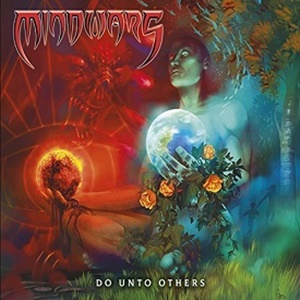 Ardent speed metal mavens may remember a Roadracer band in the 80’s that put out two cult albums called Holy Terror – of which the second Mind Wars is a serious barnburner for this scribe’s all-time list when needing that speedy thrash fix. Well not out of coincidence, Mindwars is an international band (Italy and California members) featuring Holy Terror guitarist Mike Alvord, here on vocals as well along with Danny Pizzi on bass and Roby Vitari on drums – together since 2013 and consistently pumping out new material on a once every other year cycle. Do Unto Others is the trio’s third release, and keeps the machine rolling in terms of a raw thrash with punk/speed nuanced approach that ends up with varied results over the course of its eleven tracks.

Instead of layering guitars to shape a larger than life, pristine sonic wall of sound, Mindwars prefers to keep things lean and mean – Mike’s guitar tone possessing a lot of that early Slayer attack (hinting at Show No Mercy) meets Motörhead while the rhythm section locks into those similar up-tempo / half-time transitions that became a stock in trade during 1983-1985. Diamond Head has to factor into the game for the opening riff sequence of “I Am the One”, the cymbal/snare hits providing a swing shuffle against Mike’s mechanical word delivery, while the subsequent frantic action for “Blacklisted” provides the right slam and swirl old-school maniacs crave. Occasional hints at odder chord structures occur as the record evolves – “Allegiance to Death” containing varied doom/progressive sequences against the natural heads down thrash base, while delay effects accentuate the epic passages for “Kill or Be Killed”. On the flip side, the vocal limitations keep much of the material from striving to another level – it’s more of a talk/morose delivery that works for Alice Cooper, not necessarily in a more underground thrash capacity.

What does this mean for the thrash contingency? It’s not the worst effort to come out – and it’s hard to argue for the band’s abilities – but this is just dying for a stronger vocal performance to bring it to that next level of memorable, pit-crushing brutality. 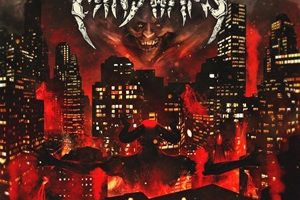