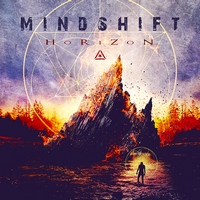 Swedish melodic death metal, strange concept right? Sarcasm aside, there’s a reason why the two seem to be so synonymous with each other. Despite the more worldly view of many bands currently, one always looks towards Sweden when the term melodic death metal is brought up – even if it’s only for reminiscence. The latest Swedish band to move in the melodic death metal direction is Stockholm’s Mindshift, with their latest release, Horizon.

Given the groove, clean vocals, and use of synths, no one is going to mistake Horizon for the ‘golden age of Gothenburg.’ This one settles in nicely with the more modern acts of the genre, such as The Unguided, Deadlock (sans female vocals of course), or Despite. Upbeat melodies, nicely contrasting heavy riffs, hooky choruses with clean/harsh patterns, and some real scorching solos are what you can expect from beginning to end. Nothing is done out of the ordinary, but it’s executed well for genre fans. Soilwork’s Bjorn Strid even lends his vocals to “My Revenge,” which is one of the stronger cuts on the disc. If there’s one tiny fault that can be given to Horizon, it’s the breakdowns. The chuggy riffs (as heard in “Arise,” for example) just seem to push the ‘modern’ envelope a bit too far for this writer’s tastes but this is more subjective than anything else. Thankfully, they aren’t in every track so it shouldn’t be a dealbreaker if you feel the same way.

Mindshift seems primed to be picked up by a label with their strong combination of modern melodic death elements. If they really want to make an impact though, they need to bring a bit more innovation to the material. For now, Horizon serves as another mostly enjoyable helping of melodeath from the country that brought it into the light.