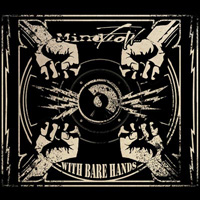 If there’s one continent that passionately comes up from touring bands in the embracing metal music landscape, it would have to be South America. Iron Maiden’s 1985 Rock In Rio performance set off a firestorm of younger musicians to pick up instruments, form bands and start making their own mark in the history books. Sepultura probably making the biggest impact during the late 80’s-mid 90’s, but within the melodic, power and traditional scope acts like Angra and Hibria need to be a part of the conversation for the current market.

Brazil’s Mindflow inch their way into this landscape, through three earlier independent releases and carefully-crafted festival appearances from Southeast Asia to mainland Europe and North America. Bare Hands contains 14 songs that appear to have a balance between solid craftsmanship and work ethic along with an ear to the modern, active radio rock scene. You’ll hear chances taken in the country twang elements against the heavier, pulsating twist riffs of opener “Break Me Out,” and the off time bass/drum back and forth action within “Lethal.” Vocalist Danilo Herbert is the star of the show, his range and power crossing over from alternative to metal and back, melodic and powerful in a latter day Lou Gramm-meets-Joe Lynn Turner way.

Where Mindflow may lose many consumers is their focus on staccato riffs and grooves that wearily put them on course with Static X, Disturbed and the like through songs such as “Thrust Into This Game” and the title track. It’s one of those rare situations where I know they have the ability to not go for the easy hook and should challenge themselves as the talent is present to do so.

This could be a sleeper hit in many parts of the world – I think if they get their tour legs underneath them, Mindflow may have a lengthy, fruitful career beyond Brazil.