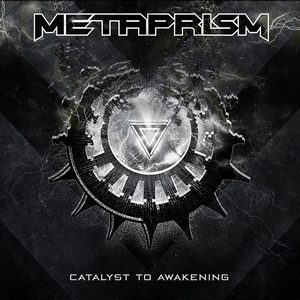 Slowly building a name up for themselves in the modern metal/melodic death scene, the English act Metaprism have sculpted an approach that is more unique than you might initially give them credit for. Following up a previous EP, as well as 2015’s The Human Encryption, Catalyst to Awakening sits as their strongest achievement to date, and should be a driving force for the act to reach even further internationally.

While the dual vocal approach of Theresa Smith and Joey Draper (who provides growls as well as cleans) may cause some to jump towards Amaranthe-y conclusions, Metaprism’s sound is decidedly heavier. It may be somewhat modern in tone, but the heavy riffing and frantic solos allude to a vibe that’s more Scar Symmetry than say, The Unguided. The riffing provides an aggressive base that allows for some very energetic tempos, with many of the tracks within containing just the right combination of swirling guitar solos and crushing grooves to pair off with more melodic moments. “Anomalous II: Ghosts of Asylum” and “Codex Regius” provide some solid examples of this – driving melodic death metal that never lacks for diversity nor abandons a headbang-inducing moment, yet feel catchy from the onset.

Speaking of diversity, the three-pronged approach of Smith’s and Draper’s vocals nicely steers clear of the beauty & the beast variety, with frequent harmonies that are nothing short of soaring, and bump up songs like “Unleash the Fire” and “Catharsis” to even greater heights. One never outshines the other, and serve as perfectly complementary – truly an effective blend of voices as the album unfolds. Even with a more melodic cut like “Aftermath,” they manage to avoid much of the clichéd space occupied by many symphonic metal acts and sit in a more fresh space while giving the listener a breather. To follow something like that up with the pulsating and destructive “Unanimous” only adds more evidence as to why Metaprism should be taking off in the very near future.

Whether you enjoy melodeath, progressive, symphonic, or modern metal, Metaprism cover all the bases in a way that’s innovative and full of life. Be it a frenetic riff, blistering solo, or an utterly addictive chorus, Catalyst to Awakening marks itself as an early favorite in 2018 and one that is worth seeking out.