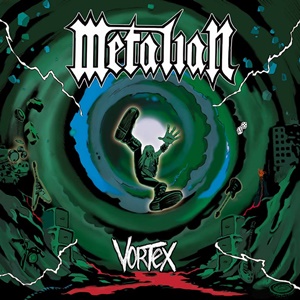 Metal tends to be a labor of love – the genre not for the weak of heart and mind, sacrifice and paying dues a part of the process on the journey to discovery. Grit and determination often separate the weak and the willing. What does this have to do with Metalian from Canada you ask? Everything – considering their development since 2003, forming in Montreal and releasing numerous demos, EP’s and albums while members came and went as marriages and children took place. They’ve self-released records, toured North America, Europe, and Mexico, taking their time as of late to let the songwriting develop. Vortex is the third album from the four-piece, and to those not in the know features heads down heavy metal with speed and energy straight out of the early to mid-1980’s.

It’s apparent from first note to last that these gentlemen live for the NWOBHM-style, high octane guitars and jumpy tempos the order of the day. Catchy refrains that penetrate cultural aspects keep “Full Throttle” as a front half favorite – Ian Wilson and Simon delivering a tantalizing, prolonged guitar break with quite the circular, spider web twin action in its concluding moments. The guitars, bass and drums come out all guns blazing, intertwining a bit of the propulsive push that put Maiden/Priest at the forefront, but also the youthful spunk of bands like Diamond Head, Jaguar, and even a US band like Riot into the mix. Check out the adrenaline-fueled double salvo of “Land of the Brave” and “Liquid Fire” to understand how they push the pedal to the floor, keeping the tones and vibe aimed squarely at the denim and leather brigade. And you want to talk about helium-high screams and fierce attitude – look no further than into Ian’s multi-octave range, channeling the best of Rob Halford with a pinch of David Coverdale when he wants to rear back for gusto. Close your eyes for “The Sirens Wail” and you’d think he was channeling the best work of Stained Class or Defenders of the Faith especially in the trailing notes of the chorus.

The relatively calmer “No Home” concludes a fine thirty-minute plus record in bass pumping/ twin-guitar hypnotic fashion – leaving the Metalian followers desperate for their next dose. Another band that illustrates Canada’s prime time nature for releasing killer metal, and the well doesn’t seem to be drying up anytime soon.