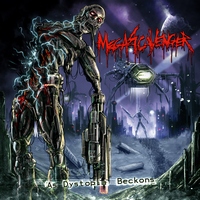 From the ‘80s-inspired cover, you can tell you are in for some throwback with As Dystopia Beckons, even if you are unfamiliar with the name Megascavenger. There are also a ton of guest appearances of the usual, death metal inspired variety. But what this Rogga Johansson project may not prepare you for though, it the permeation of industrial influences that are just as prevalent as the old school death metal worship.

It does not take long to hear the added industrial elements that been added to Megascavenger’s repertoire. The guitars are thick, the vocals are burly and upfront, but the industrial edge is unmistakable. It’s as if the old school death metal formula – lots of murky mid-tempo riffage and slight melodies, was hijacked by Soul of a New Machine-era Fear Factory, Godflesh, and The Berzerker. “Dead City” really amps up the sounds and effects from the get-go, and is one of the album’s strongest tracks, alongside the visceral “Steel Through Flesh Extravaganza.” What’s most impressive about this album is just how seamlessly the industrial and death metal sides meet. Obviously, this isn’t the first album to do this, but it’s been a long time since there’s been such a strong merger. The formula doesn’t stay static either, with “As the Last Day Has Passed” using more hooky, melodic death metal influences and clean(er) vocals to toss a welcome curveball. Later on, another curveball is thrown with the more gothic-flavored “The Harrowing of Hell,” which again uses more clean vocals and near-danceable beats in the verses.

An old school death metal album given the industrial treatment, As Dystopia Beckons was a welcome surprise to hit these ears. It feels suitably retro in every sense of the world, but also refreshingly unique at the same time. A real win-win for those into either the industrial or death metal side. 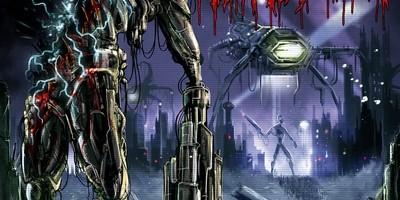 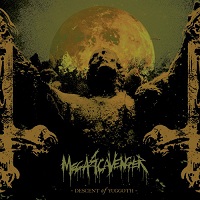