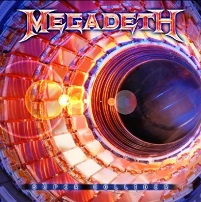 I don’t even know where to begin with this, especially after giving the songs a bit of time to gestate in my head. What we have is an album that feels like a collection of b-sides from the mid-90’s. There’s very little thrash to be found, as is the lack of speedy/aggressiveness Megadeth is known for. Instead, Super Collider a series of near boring hard rock songs that allows Dave Mustaine a chance to experiment a bit and even invite David Drainman (Disturbed) to help out on a couple of numbers.

Super Collider actually starts off strong with the speedy “Kingmaker” as the opening track and followed by the catchy title track. At least at the onset the energy is rampant and when “Burn!” began with a killer riff, I immediately perked up until the silly chorus arrived. From there, “Built for War” exhibits a slight thrashy tinge, but mainly strives to find its footing as a descent hard rock song. Sadly, enthusiasm fades when the middle portion of the album dips into several mushy and some very uninteresting musical choices.

These choices include the usage of a banjo in “The Blackest Crow” which gives the track a strange and unfamiliar tone for it to be considered a classic Megadeth tune. The spoken-word portion of “Dance in the Rain” doesn’t fit the feel of the overall song and Dave’s often confusing political views muddling up the track “Beginning of Sorrow.” Of course, utilizing the talents of Drainman as a co-writer for “Forget to Remember” and ‘Dance in Rain” raises eyebrows in the metal community, and the pairing of the two is puzzling as to why he chose to work with the often maligned singer.

It’s safe to say that Mustaine is getting old and his tiresome voice is lacking that true vicious grit of his youth. His lyrical choices are questionable on this release, and his outlandish political views have turned him into a complete lunatic, instead of a musician who once stood at the front of the thrash metal fraternity. Super Collider is a mixed bag at best, and perhaps their weakest release in quite some time.