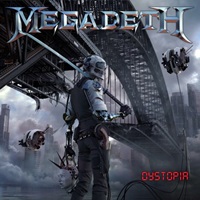 Veteran metal bands tend to get a lot of leeway from lifelong followers when it comes to disappointing newer studio records. Last year Iron Maiden’s The Book of Souls cancels out Virtual XI, while during the early 90’s Judas Priest’s Painkiller erased a lot of Turbo bad guitar synth memories… and when it comes to Megadeth, they’ve steadily tried to make Risk seem like a galaxy away. Never relinquishing their big four thrash status – and legacy bibles like Peace Sells…But Who’s Buying and Rust in Peace – many keep hoping that Dave Mustaine can deliver another blockbuster full of powerhouse riffs, snarls, and impressive musicianship to inspire the legions. Which puts us at the group’s 15th studio album Dystopia – and another lineup shuffle as Angra guitarist Kiko Loureiro plus session drumming from Lamb of God’s Chris Adler combine with the Ellefson/Mustaine team for this go-around.

Throughout the ten original tracks plus Fear cover “Foreign Policy” which closes the proceedings, the aim is clear on a beefier twin rhythm guitar assault – gallop and militant-oriented right out of the gate for “The Threat Is Real”. Anyone who is familiar with Kiko’s progressive/fluid technique won’t worry about his matching up to standards set by Poland, Friedman, or Broderick – giving cultural flair and co-songwriting duties that make the six minute “Poisonous Shadows” an album highlight, a lot of the triplet down stroking matching up to the thunderous Adler double bass hits for an ominous, almost power doom number. Dave’s sneering vocals may not necessarily be as venomous as the “Holy Wars” era, but there’s always plenty to delve into lyrically about gaining peace in a dictator driven world for “Dystopia”, vexed love in “Bullet to the Brain”, and western civilization’s decline on “Lying in State”.

Megadeth in 2016 isn’t about being the speediest or deadliest metal band to come down the pike – they know their strengths in terms of the guitar play, solid Ellefson bass foundation, and hammering home the right hooks in choruses, lead breaks, or transitions to keep you coming back for more. My favorite tracks include “Fatal Illusion” which has a little bit of that “Black Friday” circular vibe in the riff choices before the axe tradeoffs – the momentum building to a tsunami-like conclusion, while “Post American World” contains those anthem-qualities that made “Symphony of Destruction” a hit during the peak of the band’s popularity.

No, Dystopia is not the second coming of Rust in Peace – but it’s probably their best album though in the 2000’s, and surely one that Megadeth die-hards will give more than a cursory glance at. May the Rattlehead stay alive…