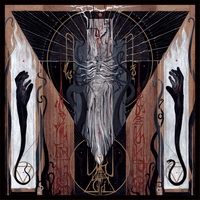 Onwards we go again, heading in the direction that many death metal bands have been traveling towards in recent years, which is Golgotha of course. Mefitic has been heading in this direction for a number of years with a good bunch of demos/splits/EPs, but Woes of Mortal Devotion serves as their first full-length approach.

Moving past an attempt at being witty, Mefitic have the whole ‘Incantation’ thing down to a science here, from the slow/fast tempo shifts to the very Pillard-esque vocals. But what keeps it from being yet another effort in cavernous death metal that drops everything down into a chaotic flurry is the fact that they keep it more riff-centric than most bands of this variety. The slow, doomy segments actually have a feeling of catchiness to them, in that slowly being dragged to your demise sense. They make a good incentive to doing some headbanging, particularly “Eroding the Oblates of the Lord.” It becomes less so when the music picks up and the drums seem to overpower the guitars in the production, which is what keeps it from scoring higher marks, but does keep the essence of its influences intact. The guitars tend to become a bit blurry in these moments, but the tempo shifts keep this from being too much of a detriment.

Woes of Mortal Devotion has its strengths in its doomier moments, but the chaos in the faster tempos does give it a more well-sharpened edge. It’s nice to see an Incantation influence that doesn’t result in a totally murky product, and gives way to some solid riffs. A solid piece of death metal here.