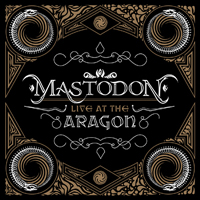 Mastodon’s 2009 Crack the Skye was necessary step for the band to laterally move into new terrains. Not only did it keep their metal foundation intact, it grabbed the elusive prog rock crowd, who have probably just now become privy to the notion that Mastodon is not some “ordinary” metal band. They’re not, obviously, and for their first live/visual release, Live At the Aragon, Mastodon further establishes just how unconventional they are.

Shot during the band’s 2009 tour with Dethklok in Chicago, Live at the Aragonis another indicator that visually, the band are a bunch of stage loiterers. Only bassist/singer Troy Sanders makes any discernible effort to be animated, while the guitar tandem of Bill Kelliher and Brett Hinds remain stationary throughout the 12-song set. Thankfully, the band employs a backdrop of video that accompanies the storyline for Crack the Skye. Otherwise, they’d be really boring to watch, although Hinds’ broken nose is an interesting thing to look at.

Airing a full album in its entirety has its share of risks, but Crack the Skye has such a nice ebb and flow to it, that it’s pretty easy-breezy for the band. Opener “Oblivion” is a gem (but the studio version is better), while the rambling “Divinations” (love the opening riff) and moody “The Czar” are sonic sojourns that are prime indicators of how deep and complex Mastodon’s sound is. Once past, the full album, a run of older jams round out the set, including the always-heavy “March of the Fire Ants,” “Mother Puncher” and a cover of “The Bit” by the Melvins.

Live albums and DVD’s are becoming increasingly unnecessary in this world of easily accessible visuals and sounds, so it remains to be seen how Live At the Aragon will land. Still, Mastodon are one of the shining beacons of the American metal scene, and their next move will be on everyone’s radar. This is merely filler until that happens.