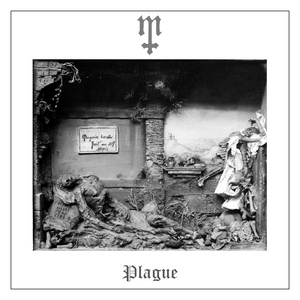 One has to admire the utter slurry that Mastiff’s sound represents. An English act that seems completely focused on providing some of the grittiest and most snarling stuff you can think of, their sound is an amalgamation of some of the most destructive music they can find. Which nets Plague the honor of being near-oppressive in tone.

Mastiff incorporate elements of sludge, grindcore, doom, and hardcore into their approach, and it is nothing if not abrasive. “Hellcircle” stomps with violence after a short buildup, with faster tempos slowly churning down over time into chunky grooves and eventually some earthshaking doomy riffs. The way that Mastiff does switch things up is worthy of note, as they can seemingly dish out heaviness regardless of tempo, but it allows the album to feel more varied and different than a straight speed/sludge fest. “Brainbleed” is about as grind-y as the album gets, with some utterly explosive speed bursts, even if it takes its time with some fuzzy ambience at the end, and the 9-minute “Black Death” is an engulfing piece of sludgy doom that simply aims to swallow the listener in murky darkness. Some tracks, like “Torture,” have an almost death metal extremity to them, furthering the flavors of hostility the band dabbles in. If there’s one thing the band has also got down to a tee as well, it’s the guitar tone. This album needs to sound filthy, and it hits the mark with corrosive oozing but not to the point of being unlistenable.

Plague is ripe with devastating riffs and immense heaviness. The perfect sort of thing for when you want something that’s just plain destructive. Mastiff will tear down plenty of paint from the walls, at a variety of tempos.