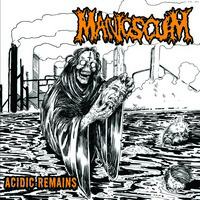 Sometimes a short but sweet punch in the gut (musically speaking) is all you need. Tennessee-based Manic Scum’s latest EP, Acidic Remains, provides ample evidence to support this idea. Old school death metal that takes not from Sweden, but borrows from their native lands from that most brutal of eras: the early ‘90s.

Acidic Remains feels firmly planted in early Cannibal Corpse, with some Effigy of the Forgotten tossed in for good measure. The production gives it a very applicable feel that harkens back to the era, but makes sure not to muddle around with it too much to the point of distraction or causing it to sound too sloppy. It’s more homage than yet another direct copy. It would be easy to cry foul with an album like this, with the near blatant feel of the previously mentioned bands, if it wasn’t so damn catchy. The riffs, from the beginning of “Strapped to the Gurney” to the closing title track, have an excess of brutal charm to them that’s bound to keep your attention. The vocals are the guttural barks one might expect to hear, but it doesn’t stop them from being a good fit (and a bit Chris Barnes-ish, during his stint with Cannibal).

The only downside? As noted already in the short but sweet category, Acidic Remains clocks in just shy of 15 minutes and it over before you know it. Perhaps it adds to the charm, but you’ll know these songs quite well after hitting the repeat button a few times over the course of an hour. Would love to hear a full-length that maintains this energy throughout.