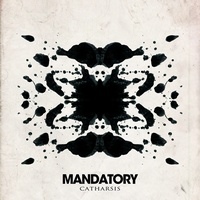 A Rorschach test cover – looks like a guy with a crazy “emperor” type hat, well two of them to be precise, or a butterfly (take your pick or decide for yourself on this one). Regardless of your analysis of the cover, it’s what’s inside that truly counts after all (just like your parents always used to say) and Mandatory play what can only be described as modern melodic death metal.

Catharsis goes for that no-frills, straight-line approach to melodic death. There’s plenty of death and thrash in the mix as well as some progressive elements, but it’s countered by some slower melodies and ‘core-ish elements from time to time. Comparisons to bands such as Arch Enemy, Soilwork, or Lamb of God would not feel out of line here. The aggression is kept intact for the most part, with tracks like “End of Watch” or “Blueprint” providing some fury alongside some catchy thrash riffs. Unfortunately, what doesn’t really work here is when they branch into more metalcore-ish elements. The biggest offender is “Emperor,” which does some chugging and uses a number of clean vocals that just lack in terms of energy and power. Something about them just feels flat. Thankfully, these are kept to a minimum through most of the tracks, but when they appear, it does weaken things.

While it’s nice to see some more modern melodic death metal bands attempt to keep more of the snarl in their music (as opposed to watering it down and “mainstreaming” it), the moments where said weakness hits keeps Mandatory from doing their best. A full-on visceral approach (and eschewing those cleans) could do some wonders here, but as is, it’s merely “okay.”