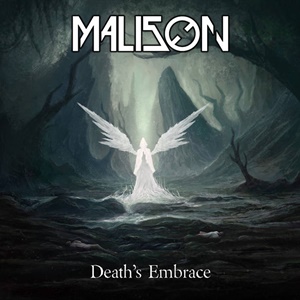 Those who believe there’s nothing exciting about the current breed of heavy metal artists parading their wares haven’t done the right research or investigation. Combining an infectious form of traditional heavy metal with neoclassical, speed, thrash, and power chops, San Diego is home to Malison – together since 2014 and releasing their Impulses EP a year later while signing to Combat Records for a self-titled debut album in 2018. Gaining a second guitarist Eddie Space in the interim, Death’s Embrace is a hard-hitting follow-up effort that tantalizes and excites listeners, given the plethora of exhilarating riffs, high octane vocals, pumping tempos, and killer lead breaks with plenty of harmony tricks.

The energy from the axe action of Mario Lovio and Eddie Spade will make hair follicles stand on attention – wasting no time right away in Dragonforce-like fashion for opener “Reborn”, while settling into solid Priest/Maiden-oriented mechanics for another mid-record highlight “Lifehunt”. Bassist Steven Rondina has a mid-range to higher melodic register that can hit those eagle screams when he chooses to – although most will probably associate his delivery and word spew more aligned with a thrash singer (think a less maniacal Sean Killian of Vio-lence). Thrash and semi-extreme nuances come out in the chugging undercurrent that is “Oblivion” – the use of wah-wah pedal action during the lead break combining with the shred/neoclassical activities charming. The quartet grab from a host of American, Canadian, and European heroes for their journey into songwriting and performance outlook – there’s a Teutonic nature to the twin guitar harmonies and double kick/fill transitions for “Corrosion”, while at other times you sense a go for broke mentality that mirrors the best of Dragonforce, Unleash the Archers, and Blind Guardian on closer “Armata”. Kudos as well to the band for keeping the focus on tightly executed material that doesn’t exhaust the listener – the songs sitting in that four to five-minute sweet spot, with an album length at an economical 35 minutes and change.

Malison has all the tools at the ready to gain ardent appeal on many power, thrash, traditional, or even outside the box live bills. Death’s Embrace provides another solid soundtrack to the lifelong appeal and enduring quality of US metal.