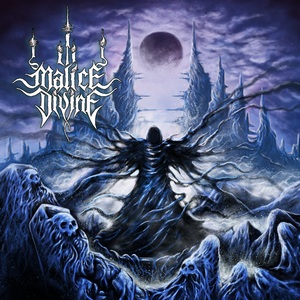 Just as the icy and cold cover art would lead you to believe, Malice Divine is a meloblack band that hails from Canada by plays by way of Scandinavia. The (mostly) one-man act of Ric Galvez (ex-Astaroth Incarnate), he handles all but drumming duty on this first release. Harkening back to the late ‘90s/early ‘00s feel, it captures a solid feel but overstays its welcome just slightly.

The band that will come to mind immediately while hearing Malice Divine’s debut is that of Dissection (as if you hadn’t figured that one out already). The frantic tremolo-picking and dark melodies are all here to enjoy, and to that end, while it does have a major cause of “sounds like…” stemming from it, it does an excellent job of conveying that tone. The melodies are catchy enough while continuously driving the music forward, and a track like “Triumphant Return” revels in dishing out these riffs that have a somewhat thrashy energy and stick into your ear upon hearing them. The problem that comes about is that these songs, and the album as a whole, tend to drag their feet a bit. Nothing wrong with 8-10 minute songs in this style, but many of the cuts just don’t do enough to warrant the extended time. Ironically, the album’s longest cut and closer, “The Transcendence of Isolation” is the least guilty of this, with an excellent opening that builds into the track and lots of dynamic shifts through the track. Unfortunately, many of the other songs – “Quantum Manifestation” is the first one that does this – stick to a similar tempo (said cut does this for all but a chunk in the middle) and end up feeling much longer than they should feel. Other songs use the same sort of tempo changes and it begins to feel a tad predictable as the album proceeds.

Malice Divine nails the Dissection-esque tone, but ultimately feels somewhat bloated as an album. But with some choice trimming in the future, there’s certainly potential to be had.