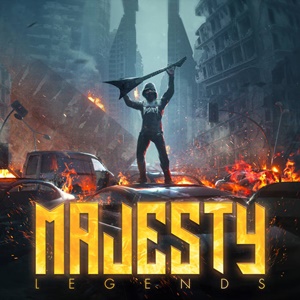 For decades considered Germany’s answer to Manowar, Majesty are up to their ninth album with Legends. Probably best known on European shores due to their long-term record deals with Massacre and NoiseArt, they have signed with powerhouse Napalm to gain more international exposure. The five-piece have had a steady lineup since 2013 – the only modification in the bass department for Arthur Gauglitz last year, so it’s easy to understand how they’ve been fairly prolific with five albums over the past seven years. After a few spins it’s evident that the band choose to increase the power/speed quotient in certain segments, while still executing the barbarian/simplified melodies and choruses that have become a trademark for the self-professed ‘kings of metal’.

Spirited guitar runs during “Burn the Bridges” gained immediate aural attention – even as the Sabaton-esque keyboard orchestration commands the lion’s share of the musical hooks for the arrangement. ‘Pulverizing the hate’ as the story of “We Are Legends” unfold, it’s obvious the nursery rhyme-like vocal melody and fire/destruction to overcome and triumph match the call to arms mid-tempo metal march, wringing out all the cliché ‘woah’ background voices and unison chorus elements to gain audience symbiosis. There’s a playful side to the guitar/keyboard synchronization that weaves in and out of the mountaintop melodies for “Church of Glory”, while you can also expect the dynamic, thoughtful ballad during the second half for “Words of Silence” (although the f-bomb in the initial verse and quick rap later seemed slightly out of place).

And then there are the flaws that dilute Legends for longer lasting, satisfying aural experiences. The quantized drum sound can be an irritant, the snare splash and clickety-clack kick aspects flooding the landscape to make you wonder where Jan Raddatz appeared and where the sampled/triggered elements end (check into the otherwise vibrant “Last Brigade” for this). Beyond Tarek Maghary’s vocals – while adequate and passionate – they also have an unintended ‘comedic’ aspect at times unless you suspend the OTT nature of Majesty style-wise. Combining a mixture of Teutonic influences (early Edguy, some parts Helloween) into the Manowar mixture, this band could be just that much better if they laid a little back on the overt dramatic action and put the focus / intent on executing the songs with their obvious talent and abilities.