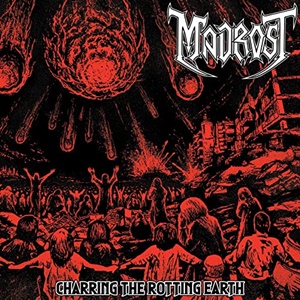 These days crisscrossing genres allows acts to gain distinction, especially if the blend is potent and natural. California act Madrost subscribe to this philosophy, injecting their thrash/death mix with progressive and energetic interplay for their fourth full-length Charring the Rotting Earth. Releasing three albums independently between 2012-2017, the time seems right to elevate the promotion and distribution through label support, and the quartet has the seasoning and confidence to keep these seven songs very entertaining amidst all the riffs, intricacies, and time signature juggling.

It’s rare to hear a band blend together some killer guitar sequences over pummeling blast beats – then become more jagged and left-field in the musical components when pushing the thrash barriers, but that’s the case here for most of the record. It’s like taking the best of American acts like Immolation and Death, adding in some of the spirit of Napalm Death, but then going left field with aspects of Voivod, Revocation, and Believer. “Dying Thoughts” for instance contains wild jazzy piano passages that pop in and out against this killer death to thrash and back tempo template, while guitarists Tanner Poppitt and Necro Nick whirl around with neoclassical-like breaks and relentless picking/riffing. Drummer Mark Rivas and bassist Richard Orellana are up to the task of expending energy in a seemingly effortless manner, pushing the accelerator and then changing into a mid-tempo restraint that’s still full of progressive/technical brilliance, check out their mechanics and fluid interplay from triplets to blasting mannerisms for highlight “Impossible Dreams” that bring latter day Death to mind. Tanner as a singer has a hoarse roar that does its best to keep up with the action-packed speedy proceedings, be they more Forbidden meets Revocation-driven during “A Violent End to Life” or roller coaster as things unfurl during the blitzkrieg progressive opener “The Serpent’s Quest”.

Not wearing out their welcome in a half-hour effort, Madrost know how to be progressive in their death/thrash blend yet at the same time create plenty of memorable hooks, harmony, and melody aspects from the musical end of things to retain interest. Charring the Rotting Earth should satisfy those fans looking for something a little more challenging while still being crushing and heavy.