Made of Hate – Pathogen (AFM Records) 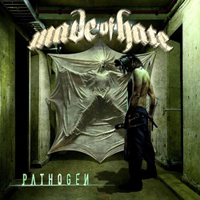 A take on the still-overdone melodic death metal style by way of Poland, Made of Hate’s Pathogen plucks from the loins the usual melo-death constituents, and proceeds to ruin it with some lousy vocals. Granted, English is not the first language for the Poles, but most bands who are unfamiliar with the King’s Language usually just forget any means of being discernible and scream their way through an entire album. Not here. This is some of the most annoying barking this side of your next-door neighbor’s dog.

Stylistically, the band has the melodic grip of In Flames, Soilwork, etc. down-pat, which isn’t anything to write home about. There are some quality melodies being bandied about on “Russian Roulette,” and the solo section of “I Can’t Believe” all of which we heard roughly 10 years ago. The title track sees some nifty 80’s guitar

licks tossed in, while “Questions” enjoys a nice run of Maiden-like guitar harmonies.

The real beef with Made of Hate is singer/guitarist Michal Kostrzynski, who sounds like a lazy Peter Tagtgren (Hypocrisy/Pain). Attempts at creating any type of vocal hooks usually blow up in Kostrzynski’s – just check out opener “Friend” and the chorus for “Russian Roulette.” The main’s bark (and that’s pretty much what it is – a bark) is tuneless and distracting, and detracts from the otherwise workmanlike approach the band takes to melodic death metal.

Unfortunately, there is no “off” switch for Kostrzynski’s vocals, and while he totally douses any type of momentum garnered for Made of Hate, the bulk of Pathogen proves to be solid musically. Surely there’s a dearth of good vocalists in Poland, so in a rare instance, we’ll prefer for a band to mindlessly gurgle their vocals instead of trying to be tuneful. It may work for Made of Hate. Who knows…