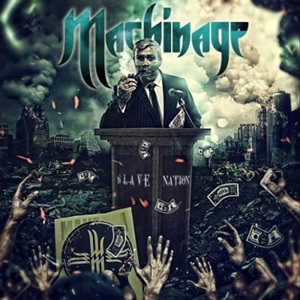 It’s no secret that thrash has long been a favorite genre to this scribe – growing up through the first generation of Bay Area, East Coast, and Teutonic waves of the 1980’s, only to see things subside in the 1990’s a bit when death and black metal took ahold of the underground. Since then a reunion/ festival craze awoke many of the veterans from slumber while influencing a second and third generation of musicians to take a stab at spreading and slaying their ideas into speedy devil horns glory. Putting in the DIY hard work (including a number of self-financed tours year after year to the USA since 2011), Brazilian thrash band Machinage smartly recorded this second album Slave Nation during one of those US tours a couple of years back. Recording with Curran Murphy and gaining a mixing/mastering assist from the great Max Norman (Megadeth producer), it really isn’t shocking that the stars align with Megadeth bassist Dave Ellefson to sign with his upstart EMP Label Group.

Throwing around a lot of Megadeth comparisons shouldn’t surprise most – although the general delivery from guitarist Fabio Delibo on vocals contains more of a moaning Tom G. Warrior aspect to his Mustaine-like charm, especially evident on the mid-tempo oriented “Destiny” (with one of the riffs similar to a Boston-thrash legend classic “Revenge” from Wargasm). Exotic guitar strains open “Spirits of War” – a much darker-oriented arrangement that features more of an atmospheric, almost doom-like instrumental section where drummer Ricardo Mingote accents things with some tribal, Latin-oriented hits. Those who feel the need for more conventional, up-tempo bashing and equally vicious jackhammer riffs need only look to “Revolution” and the title cut for some ripping, adrenaline-fueled electricity which gain easy whirlwind / wall of death seals of approval.

Machinage inject a number of harmony and melodic licks into the foundation of the songs – shredding tastefully when called for but also sticking to the key themes for aural retention. There are even occasional nods to the commercial side of things – “My Monster” for sure a number that has a lot of “Hangar 18”/ “Foreclosure of a Dream” visions between the main guitar hook and rhythmic vocal delivery. The lyric content and cover delve into political corruption and social injustice issues which come with the thrash territory- and it’s refreshing to hear other countries take outside influences and not be another Sepultura clone.

Slave Nation gives the trio a fierce sophomore effort to build upon, very melodic and dynamically diverse in the end that will please most thrash mongers.