Lychgate – An Antidote for the Glass Pill 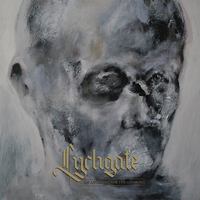 Now here’s some shit right here. UK black metal gloom merchants Lychgate made quite an impression on the world with their debut in 2013’s self-titled album. In a quick two years, they have returned to release An Antidote for the Glass Pill on Blood Music records. It seems that Finland’s Blood Music was wise to sign Lychgate for their sophomore release, as it’s really an album that stands far apart from the herd – it sure doesn’t sound like anything I’ve heard before, and deserves the accolades it is sure to garner.

Grand strokes of ominous tidings and foreboding madness, executed in highly original form, with impeccable musical prowess and vibes dark as night await the listener on AftGP. The first thing that creates the originality in the sound is the highly prominent church organ throughout the album. The band creates a palpable mood – odd and frightening, Lovecraftian themes meeting a Sherlock Holmes thriller, under the spell of progressive black metal. The whole affair evokes the feeling of being spellbound in a church graveyard and bearing witness to something very sinister, elaborate, and hypnotically consuming.

Twisted and jagged melodies laid out by guitars (there are three of them in the band) snake around diverse rhythms and furious vocals. Nifty fretboard play is on display as well, always remaining as a layer to help paint the picture, rather than a stand-alone (solo) display. And these guitars sound good, with rich, clean production values throughout the album. These songs are certainly not highly accessible to the casual listener, as repetition and catchiness of melody is not really in the cards. It doesn’t need to be, yet there is abundant and vibrant melody here, everywhere, including tastefully done clean vocals. The songs progress like thematic movements, really with a cinematic feel. The album plays like a top-notch musical might (if said musical were inspired by vintage horror, touches of early Mr. Bungle, and savage Norwegian black metal). I’d see that.

Antidote for the Glass Pill is an experience and quite an achievement. Without a doubt an album that requires a couple listens to digest all that is happening here, for it’s a lot. In the end, you still might not know just how you should feel, but understanding that you went on quite a trip…and won’t take another one like this anywhere else.