Lonescar – Lust for the End (Self-Released) 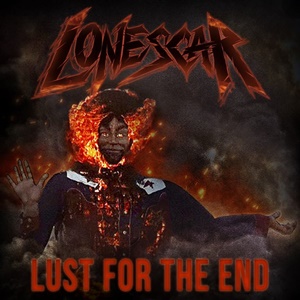 The Lone Star state has a potent metal scene – and Lonescar are another act to put on that map for this full-length Lust for the End. Together since 2012 with two previous EP’s under their belts, its evident throughout this eleven-track platter that the band construct a groove-oriented thrash sound with extreme and modern elements that can cater to a wide swath of metal consumers. You can expect heavy-handed hooks, transitions that elevate pit-action, and venomous screams and roars on the vocal front that keep the quartet leaning towards the underground.

Musically the group can be very methodical and punishing through it’s mid-tempo rhythms and supplementary alternative accents, where Gojira and Metallica slam headlong into each other during “Undead Assembly” – and then lay down some serious double kick and ripping guitar activity on the follow up “Means to an End” where you can think of Lamb of God meets Slayer. Of course the groove-mastery of Pantera pops up a bit here and there during songs like “For Envy’s Sake” and “Revolution Now” – the latter featuring some insane drum work from JC Hernandez that rivals Morbid Angel. Occasionally the odd-ball alternative-oriented guitar structure pops in here and there to give a specific song dynamic clarity – check out the opening sequence for the title track in that regard, allowing the subsequent heavier back and forth changes more room to gut punch in all the right places. As a singer Brian Valdibia has that commanding bark and savage scream nature down pat – Phil Anselmo and John Henry of Darkest Hour would be two reference points when you hear his voice during “Gluttonous to the Core” and “Self-Led”.

You really feel that the attention to detail from bass to drums, guitars to vocals shines because of a lively production value which jumps off the speakers, and probably rivals what one can expect from Lonescar on stage. We know plenty of people who follow the mix of groove-oriented thrash and extreme bands, and as such Lust for the End can cater to both audiences. Aggressive as well as bouncy, another American act to keep your eyes on.