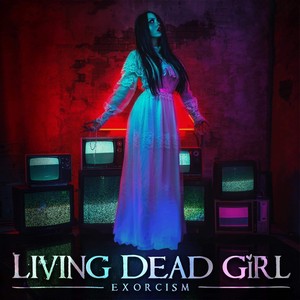 It’s always a nice feeling to come across artists that are willing to stretch or completely breakdown genre boundaries and experiment a bit. While some may find Living Dead Girl to be a polarizing experience, Exorcism pulls from the metal/hard rock world but sprinkles some genuine pop flavors on the top of it to provide a sound that feels like it legitimately belongs to both realms.

Individual tracks may vary in their degrees of the blending and swirling of influences and sounds, but it only adds to the curiosity factor as Exorcism rocks ahead. At the end of the day, what unites the experience is that it’s a fun, heavy, and addictively catchy release. Tracks can shift on a dime, such as the title track, where heavy grooves, industrial elements, and screams immediately switch into a soaring, Avril Lavigne-esque chorus complete with sugary clean vocals and shouted cheerleader gang vocals. “Villain” contains a more directly upbeat and pop coating, but still includes some chunky riffing and occasional screams to give it added punch at the right moments. Other songs like “Give Up” and “Alive” have less jagged contrasts to them, but feature some strong choruses without forgetting to play up the heaviness with catchy riffs and intense moments. The only track that stays entirely melodic is closer “Stronger,” which captures a more ethereal and relaxed tone but still gradually ups the heavy quotient to a very satisfying ending.

Truthfully speaking, the name of the game with an album like Exorcism is fun. If you want your metal to be straight-laced and just packed with heavy from start to finish, this isn’t going to be for you. But if you are game for something a little bit different and are eager for some incredibly catchy melodies with an aggressive bottom end, Living Dead Girl might just be what you are looking for. Founder/vocalist Molly Rennick has crafted something that’s heavy and gothic, but can also provide a wickedly upbeat and enjoyable experience.