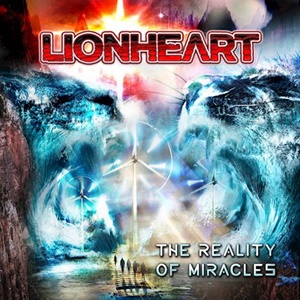 Containing guitarist Dennis Stratton, best known for his work on the debut Iron Maiden album, Lionheart explores more of the AOR/melodic hard rock side of things for their third full-length The Reality of Miracles. Originating in the 1980’s and on a major label with their 1984 debut Hot Tonight, they broke up a year later. After a double album of demos appeared in 1999, a reunion took place in 2016 with new singer Lee Small (ex-Shy), recording Second Nature the following year that received critical acclaim and allowed the band to tour Japan and the UK. The quintet contains a mix of seasoned players with experience in current or past lineups associated with UFO, Michael Schenker Group, and Uli Jon Roth among others – perfect to develop some solid, catchy material with strong vocal harmonies and equally engaging melodic hard rock music to back things up.

The material has that older 80’s flair when the guitars often sat in tandem with the keyboard passages to create this anthemic, arena-rock focus – allowing the vocals to capture the lion’s share of attention. Lee has that comfortable rock voice, shining to the stars on “Thine Is the Kingdom” as well as the Toto-like title track where the chorus of the latter has that choir-oriented upper lift to become a Lionheart staple. Meanwhile the guitar interplay of Dennis and fellow axe man Steve Mann gets down and heavy for the energetic offering “Five Tribes” – proving that the band can be a little more metal when they want to be, serving up some quick, fiery lead breaks throughout. A mix of ballads, mid-tempo, and slightly faster melodic hard rock offerings ensure plenty of diversity and dynamic pacing from first cut to last – Lionheart emphasize those clean cut choruses that went down a storm on AOR radio from the 80’s, as “All I Want Is You” and the Japanese themed “Kingdom of the East” check off all those benchmarks. As you take in the closer “Still It Rains on Planet Earth” and those multi-part vocal harmonies mesmerize (think Little River Band in primetime), you’ll understand why certain members have done work on Def Leppard and Michael Schenker Group records.

The Reality of Miracles is solid AOR/melodic hard rock and gives the listener plenty of quality material to digest outside of the metal box.