Friday, 17th May 2013 By Clayton Bartholomew 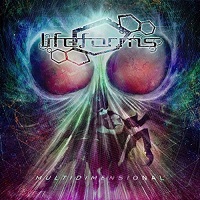 Anybody out there really dig the whole Djent thing? Ya, me neither… but this debut album by Sacramento tweens Lifeforms isn’t the most awful thing ever. Trust me. These savants brandish serious musical prowess and, it would appear, Doogie Howser-like math skills. Sporting 21-string guitars tuned to the key of H, odd time signatures and clean guitar leads for atmosphere as the cherry on top, these guys have nailed the Meshuggah worship.

After spending a few minutes stalking their social media presence, I have to hand it to this band for putting in the work to shamelessly self-promote in a seemingly effective way and the result of that hard work has paid off with a record deal via Lifeforce Records and a solid following. The production on Multidimensional is crisp and clean and the song structures are well thought out, but I feel a bit like Bill Murray in the movie Groundhog Day as I have heard this before… like, a lot.

The highlight of the album for me is the song “Dimensions 2,” which packs some catchy riffage and a memorable vocal melody but just as quickly, it takes a sour turn by going all Linkin Park on yo ass with cheesy programming. Of special note are the sub-bass hits periodically sprinkled in ala Fear Factory and perhaps some artificial Korn flavoring.

If you’re looking for originality, you might want to go elsewhere. If you like your metal “djentrified,” look no further than this rather one-dimensional album.