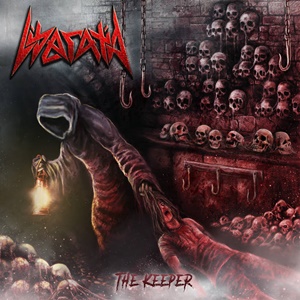 Aiming to play sick shows and deliver great music, Liberatia are a younger quartet from British Columbia – homeland to Unleash the Archers and Annihilator among others. Since forming in the fall of 2013, they’ve just been playing out and refining their craft by releasing singles until this debut The Keeper – considered a full-length by the band, but for our purposes it’s better classified as an EP at six songs that doesn’t even eclipse 26 minutes. When taking in this material, you get a sense that these musicians feel a collaborative process works best in synthesizing modern and classic death/thrash influences to produce an explosive punch for the consumers.

Many of the songs contain tremolo picking action against blast beats, only to shift into a more chugging, straightforward thrash angle to ensure variance. Bassist Aiden Shepherd and guitarist Craig Ford share the vocal duties, mixing things up from death growls to raspy metalcore screams – perfect when tackling a song that can go from Gojira mechanized parts to something that bridges Kreator and In Flames intensity and guitar melodies for the opener “The Keeper of Skulls”. The riffs cascade in linear fashion, an asset as they can shift from extreme measures to more ‘wall of death’ orientation in a nanosecond, clearly evident on “Heartless”. Craig and fellow guitarist Trylan Foulkes provide complementary rhythms and twin harmony accents to carry the bulk of the hook factor for this outing, the lead breaks also falling mostly in line with the atmosphere and mood of the arrangement at hand. Youthful exuberance occasionally makes for some rough going when it comes to the occasional hardcore/clean vocal parts – but this is probably an area that can be smoothed out as the members gain more seasoning and experience. You can’t go wrong with a sinister title like “Baptized in the Blood of Disease” – a 2:17 smashing example of At The Gates-like ferocity against some In Flames meets Amon Amarth charm.

Liberatia smartly waited to issue a collection of songs until they had been refined and road-tested, making The Keeper an in your face offering that could gain a wider underground appeal due to it’s multi-faceted death/thrash approach.