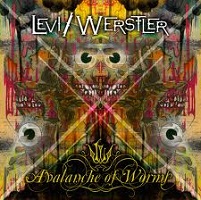 Not exactly the first place we’d run to when it comes to instrumental guitar shred albums, the duo of Eyal Levi and Emil Werstler of Atlanta-based modern death metallers Daath have pulled a fast one with Avalanche of Worms. Whereas Daath’s material is riff-based, usually song-focused, shred-lacking (in some, but not all parts), Avalanche of Worms is a veritable potpourris of instantly memorable guitar action. And when you break it all down, this might be better than the style’s usual entrees. Just saying that probably made some guitar nerd’s underwear bunch up. Ha.

Joined by drum lord Sean Reinart (Cynic, ex-Death), Avalanche of Worms gains instant texture, as songs like “Dura Mater” and album highlight “Noxious Vermin, My Friend” blend melodic, elaborate guitar lines with Reinert’s stellar timekeeping. Both Levi and Werstler have their own styles, of which this scribe has difficulty making the differentiation (not like it matters), yet their playing often is thoughtful and restrained. Nary is there a moment when the pair are shredding just for the sake of shredding, which in itself, is virtually unheard of in this realm.

The bulk of this 12-song outing leans toward the progressive metal angle of things, and it’s inviting to hear well-honed and structured numbers such as “Loathsome Little Fiend” and “Chrysalsis Wound.” Most specifically, the latter, which pretty much flies in the face of anything Daath has ever done thanks to its dreamy, spaghetti western vibe. Guess that’s what these albums are for, eh?

If there was an album to appeal to those on the fringe of industry standard guitar instrumental albums, then it would be Avalanche of Worms. We’re not talking Friedman/Becker level here, but it’s hard to look past the skilled and fluent playing of Levi and Werstler. One has to think that future listens to Daath will cause some to pine for this kind of playing. Not likely…that’s what this album is for. Well done.